A simple glass vase can be decorated with transparent glass mosaic squares. They are transparent and colored squares can be folded patterns. And as the clear vase, by the bits of glass is not necessary to use grout: shiny faces squares reinforce the impression of the beauty transparent vase. Transparent windows are larger and fewer in combination create a beautiful ornament.

1. Measure the circumference of the vase and cut out a circle of paper or the cone of a size to match the size of the vase. Then wrap the vase of paper and draw a pattern on it.

2. Remove and paper outline the contours of the figure – in this example, the wave crests. Thus prepared stencil cut out with scissors.

3. Template glue in several places with tape. Smyvatelnym marker or pencil outline the contour of the stencil to the vase.

4. Stencil take off and expand on it mosaic squares. Whitecaps emphasize smaller colored stones. Large transparent set for them.

5. Under vase enclose a towel to keep it rolled and begin to glue the mosaic. Clay for mosaics or synthetic universal transparent glue for glass (UHU) smear on a little piece of a vase and immediately attach the box.

6. Mosaic sticking, following the curve of the wave. On the ridge, we put small colored squares, the very large set wave.

7. Sticking a few centimeter bands and, before the vase to turn to continue to glue the next, should be left to dry pasted squares. Immediately after gluing boxes can still be moved (eg a toothpick) to find the right place.

8. If there is a gap, fill it in smaller pieces. The curved part of the vase cover the large squares. Chance for variety inserts colored glass. 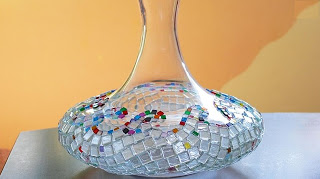 How to make stylish flower vase – Step By Step

How to draw herbal mural – Step By Step

How to make mini vase bamboo

How to make jar vase lamp